On the 10th of October the Cylde and Argyll fungus group visited Carrifran wildwood to survey the fungi present. Our Junior Rangers joined in for the chance to learn about fungi and visit Carrifran for the first time. 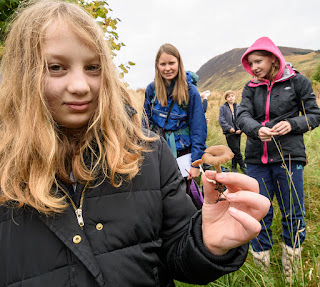 There were plenty of Deceivers ( Laccaria lacata ) who's changeable form deceived the junior rangers many times! A pioneer fungi it is often found in young regenerating woodlands (where as an ecto-mycorrhizal species -  it brings vital nutrients to the trees it partners with)  Some were brave enough to taste the Fire Milkcap (Lactarius pyrogalus) who's name gives away the experience!


Roy Watling, who surveyed Carrifran before the first trees were planted reports:

"A successful foray on the 11th to Carrifran in the Scottish Borders yielded amongst other things a clutch of Pink-gills (Entoloma politum, E. rhodopolium and E. sericatum) and a good fruiting of Lactarius aspideus under the willow. Fungus-wise apart from the expected willow, hazel  and birch inhabitants it was instructive to find Marasmius setosus growing on hazel leaves, a less frequent host  it usually being beech; there was a good haul of small mycenoid and marasmioid fungi. A full list can be supplied to anyone interested."

Thanks to the Clyde and Argyll fungus group for surveying Carrifran and taking the time to teach us all about the fungi we found and Richard from NTS for his assistance and taking the great photos!


Posted by borders forest trust at 12:53