Many thanks to all those who came along to help record the species in the Gameshope valley on the 8th May. 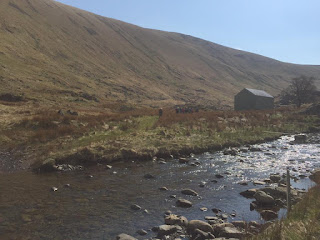 The climate is certainly very changeable in those hills,  with the high winds of the night before, transforming into a hot sunny day.  This was good news for our enjoyment on the day but did mean the moth traps put out over night were mostly empty.

We also put out a bat detector recording box borrowed from the Southern Scotland Bat Survey scheme. We're awaiting results and will be surprised if we have any bats recordings from that night! We plan to have another go recording bats in August. Its a brilliant project and if you'd like get involved in surveying, more information can be found here 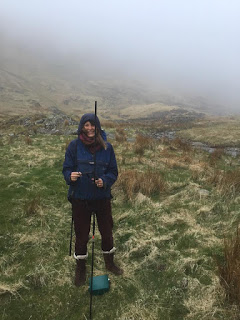 There was a big contingent of bryologists, who taking advantage of the good weather headed right up to Stirk Craig. They made over 90 records, one example being Alpine Water Moss  (Fontinalis squamosa), only the second record in vice county 78, the other being recorded last year lower down the valley. Excitingly Liz Kungu just confirmed the identity of a rare species of Sphagnum called Sphagnum platyphyllum - which is a new record for the Scottish Borders.

Whilst out a variety of plants were noted, an interesting example being cloud berry Rubus chamaemorus  which grows in acidic soil on high boggy ground. Later in the year this bears an orange rather unusually flavoured and delicious berry! In Sweden this is a much loved fruit however in Scotland it is far too uncommon to harvest.

A carrion beetle was spotted, (Nicrophorus vespillioides) feeding on a dead field vole!

this image is from wiki commons (Guido Bohne) included for interest !

Some fragments of wood were also discovered by Ron Mcbeath,  exposed in some peat where they had been buried at about 1m below the surface, possibly Birch and Juniper! 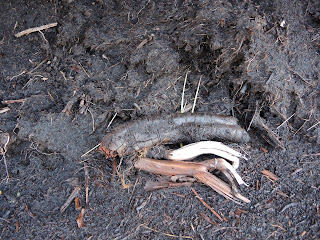 A range of birds  including Common sandpiper, Dipper, Grey Wagtail, Mallard, Meadow Pippet, Pied Wagtail, Raven, Carrion crow, Red grouse, Sky lark and Swallow were also seen/heard whilst folk were out and about.  The Bilberry Bumblebee also made an appearance lower down the valley.

Kick sampling in the river yielded a variety of Mayflies, Stoneflies and Cased Caddisfly larvae, whilst the loch at the top had Sticklebacks in it. 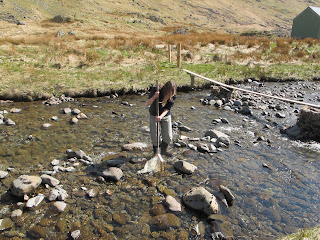 We're now building up quite a comprehensive data set particularly of the vascular plants and bryophytes, We could do with some more attention on the invertebrate world, so please do get in touch if you'd like to help with the recording effort.

Thanks again to all involved.


Posted by borders forest trust at 14:40